The girls and I survived another weekend alone.  Josh had a game in Kansas City.  My annual end-of-January meltdown has already passed (clearly since it's February,) but let's just say I'm over it.  "It" being the single-parenting of basketball season.  But, we've had a decent season (15-9) and there's 5 games left of regular season = Light at the end of the tunnel!!

This is Aubrey's serious look.  We call it the "small mouth" and think it's hilarious. 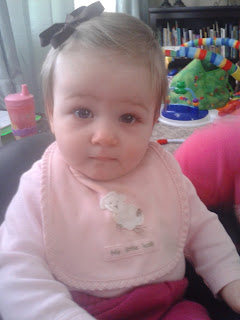 The night before they left for KC the team went to Kyle's parent's house to eat dinner and Langley got to go.  Josh said she was so good and he genuinely enjoyed the time with her.  Sweet girl. 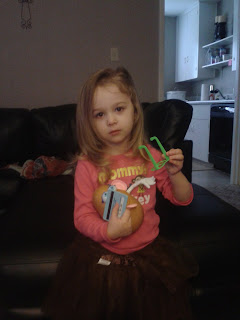 We did normal stuff here, didn't leave the house accept for one grocery store run, made a craft, watched some movies, and Aubrey started clapping and went from tummy to sitting once.  Josh got home at 2:30 Sunday morning and we made it to church.  The girls took good naps (they usually do on Sundays!), I went to WM, and we went on a family walk.

I also discovered the joy that a $2.47 box of valentines can bring my child.  It took her 5 seconds to pick out the princess ones.  They also come with a poster.  Stop it.  She's thrilled.  So, take that pinterest...no homemade valentine I could have imagined would have made her this happy!

Speaking of pinterest, I do love it and I have actually done some things I've pinned.  When I complete one, I move it to the "I actually did it!" board.  Here's a pinterest recipe I did last week for chicken tenderloin. 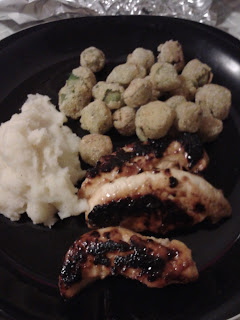 Happy Monday.
Posted by Rachel at 9:42 AM