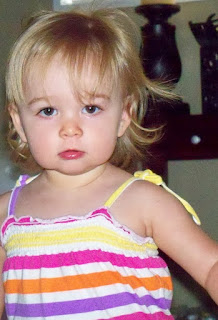 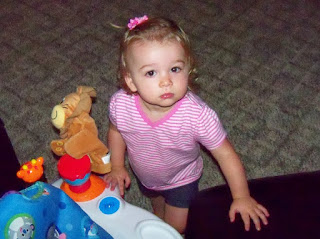 Posted by Rachel at 1:41 PM No comments: 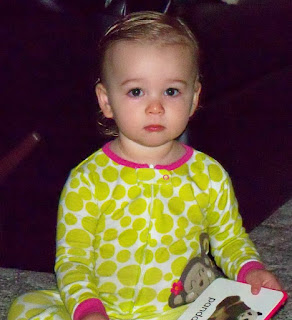 Posted by Rachel at 7:32 PM No comments:

We had a family outing to the lake yesterday afternoon.  It was hot and technically during naptime, but we had fun for an hour. 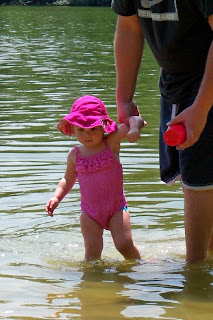 The water felt like bathwater.  She had no fear and just wanted to "swim" by herself.  She didn't understand that it got deeper :-) 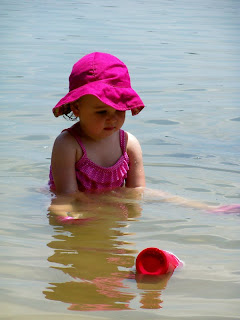 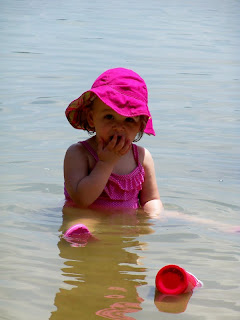 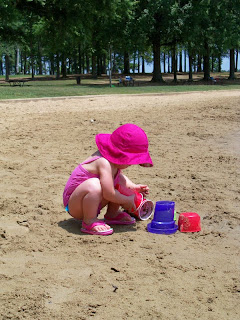 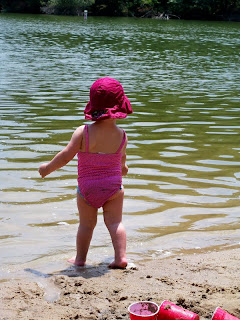 She also got her first tan lines on her legs (despite being coated in spf 50.) 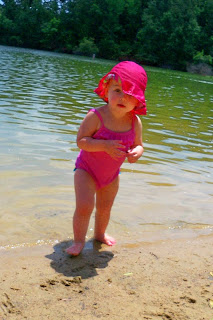 I don't have many words today.  So, I guess I'll just point out that the shirt Langley is wearing is a 3T.  3T!  She is growing so so fast!  All of her size 5 shoes were outgrown this week. 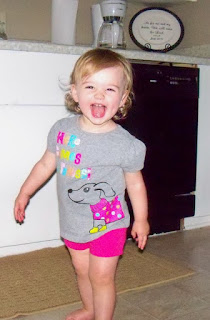 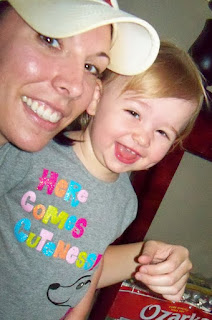 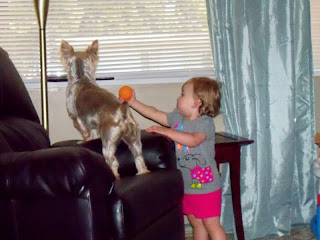 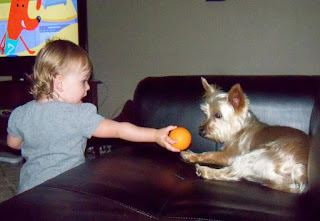 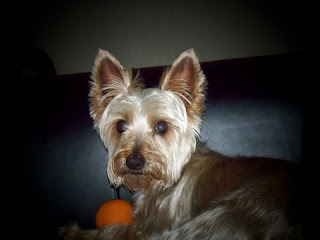 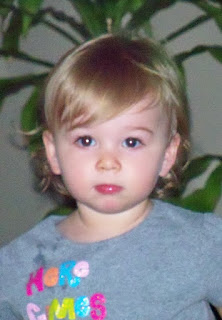 I got sunburned today in the backyard pool.  We are thinking about a trip to the lake tomorrow.  Oh yeah, and we had a play date a few days ago and it was so fun and encouraging!
Posted by Rachel at 4:16 PM 1 comment:

Josh had his annual guys trip to the Cossatot river this weekend and Langley and I headed down to SW Arkansas as well!  We got to visit with lots of family including:  my mother and father in law, sister and brothers in law, the Tanaka tribe, my mom, memaw, aunt cleo, trudy and kristin, sharon and the Plyler boys, linda, karen, kim, plus our nursing home peeps, and the park hill baptist church folks! We had a good time, but Langley did not eat or sleep for about two days. There was just too much excitement, I guess.

On the way down, while we were packed into the truck (Henry and all) and already uncomfortable, the AC went out.  Let's just call it unpleasant.  Well, since we apparently own the "miracle" truck, it turns out nothing was  broken [maybe it just froze up.]

Well, as my luck runs, the passenger side window accidentally got busted.  It is fixable and no one was hurt, and that is what is important.  So, our ride home today was again on the unpleasant side.  But, we made it!!

Speaking of things that happen only to me...this morning before church I went to put some gas in my mom's car since she had let me use it for a few days.  I pulled into the gas station, thinking I was one step ahead of the game since I knew what side the gas thing was on, and tried to access the gas cap.  Um, I couldn't figure out how to open it.  There was nothing to pull or grasp, so I assume there had to be a button inside the car.  My mom's car is pretty complicated -- I had to ask her how to lock the car if i was inside because the button is randomly in the middle instead of on the door  -- so I start examining every control.  Nothing.  I looked in the middle console, around the radio and AC controls, on the door.  By now I am sweating and getting embarrassed.  Then I try to be mature and I look again, this time nearly standing on my head.  Ya'll I ended up driving back to her house and getting out the owner's manual!  After 5 minutes, I realize that you just flip it open, even though it is hard to get hold of anything to do so.  I go back to the same gas station.

I grabbed a card out of my wallet and swiped it.  Crap.  I had grabbed a rebate card from verizon.  It's like a pre loaded card.  The machine wont read it, "see cashier."  I leave my baby in the car [all windows down, it was about 10 am] and head inside.  There are 3 people in front of me in line.  Even though I was in A-town, I was jittery about leaving my child in the car, it was bothering me.  I get to the cashier, explained what happend, told her how much gas I wanted to pre pay for, and she tells me she can't reset it becuase I left the nozzel in the car.

By this time there are 5 people behind me in line.  I just left.  I was done.  And sweating.  I left Josh a very dramatic voicemail about how God did not want me to get gas today, so he would have to do it when he came to get us.

I was so busy this weekend, I didn't take any pictures on my real camera.  I started laughing when I looked at the pictures on my phone because they are so random (much like this rambling post!)  Phone pics from our weekend:

Langley trying to put my mom's glasses on.
This singing purse was one of the favorite toys this visit.
Reading with Memaw

Posted by Rachel at 1:31 PM No comments:

What we've been up to:
- discovered Langley has two more teeth!  Both in the back, 1 on top and 1 on the bottom.  They are sharp!
- been in the pool!
- had a thunderstorm this morning!
- been pretty much inside or in the backyard pool because it's too hot to do anything else!  While inside we've watched a lot of sesame street, little einsteins, and mickey mouse clubhouse.

Posted by Rachel at 3:31 PM No comments:

There's no way to beat this kind of heat (100+ degrees!)  The kiddie pool and a water hose are really the only relief we could get today!

We loaded up on sunscreen, drinks, and some toys and had ball for nearly two hours in our own backyard!
We also had a lawn chair and the water table.  Redneck? Probably.  Do I care? Not so much.

I finally figured out that if I would wear a hat, Langley would too!  I'm so glad she wanted to be like Momma because I was so worried about the top of her head getting burned!

I just remembered Langley got another inflatable slip n slide type thing for her birthday.  We may be breaking that out tomorrow!
The news just said it is 102 here right now with a heat index of 111.  Thank goodness we have some left overs, because I refuse to turn on an oven!
Posted by Rachel at 5:31 PM No comments:

Bringing a Smile to Your Monday

This is one of the most random (and funny, to me) pictures ever!
Posted by Rachel at 7:30 AM No comments:

It Didn't Take Me Long

Yesterday as I was driving to pick up the mail - with my daughter in my lap- I realized that I am settling in quite nicely.  Seriously, how country is that?!  Driving to the mailbox?!  Baby in my lap?!  Sounds a little Brittney Spears-ish...except I wasn't in LA...I only saw 1 other moving vehicle.

Seriously, life is good here.  I crave simplicity, so this place is great for me!  I am getting a little antsy since we've haven't had any sort of routine, but most of the time I'm enoying the mostly schedule-less summer days.  School will start soon enough, and I will be a full time SAHM for the first time while my husband works round-the-clock, and I will miss these days of nothing on the calendar and having him home a lot.

Posted by Rachel at 7:29 AM No comments:

Williams starts school later (August 31) than most due to mosquitos.  I would say the swarm arrived last week and it is now in full force.  Some nice neighbors just dropped by to introduce themselves and approximately 10,000 mosquitos flew into my house.  I sprayed OFF all around the door. Note to self: if I ever try to do something nice for the new people, don't go at dusk in the middle of July.

Langley will cover her mouth and laugh, which makes me laugh no matter what.  She will also dance to anything that has any form of a beat...it's always hilarious, but my favorite is the "hot dog dance."  Her dancing is mostly nodding of the head and stomping her feet. She has inherited her father's dance skillz.


God has answered so many prayers during this move.  He orchestrated the move of some other OBU people here at the same time!  Not to mention a Chi Delta sister who lives 10 miles away-- in the town I go to for Walmart! Pretty cool, huh?!  Before long Walnut Ridge/College City/Pocahontas/Lawrence County/Randolph County will be the place to be ;-)


**I will clarify that by "kickin' it" my husband meant he introduced himself and they chatted for about 5 minutes at a recruiting thing today.  This was not nearly as funny to me as when he met Coach K.  "I met coach K!  He called me Josh!" Oh the memories :-)

Sorry no pictures tonight, I'll have some up in the next day or two!
Posted by Rachel at 8:09 PM No comments:

Not Much to Say

All I really have to offer tonight are some pictures of Langley and Henry.  I guess I could tell you every detail of our day, but that would bore you to death.  Thankfully no craziness occured at WM, getting my oil changed, or cleaning the kitchen.  A highlight of today could be the 2.5 hour nap my child had!!

So, before I get lost in reruns of Pawn Stars and My Big Fat Gypsy Wedding, I give you pictures from our [brief] backyard time this afternoon. It's hot!

Posted by Rachel at 7:43 PM No comments:

who really needs a longer nap!

This past month she has :
...adjusted quickly and easily to our new house.
...visited 3 different church nurseries and had fun.
...become quite the water baby.  My mom got her a water table, which she loves!  At first she splashed and splashed, then she would dunk her face in trying to drink the water.  We also have an inflatable pool in the back yard that I put her in for the first time today.  It's pretty big (over 6 feet long) and I put about a foot of water in it.  She ran back and forth until she stopped shivering, then would put her face in, splash, and lick the water.  She had a blast.  I actually shed a tear because she was so happy and not doing anything she wasn't supposed to.  I kind of expected her to fall over the side or eat grass or something else, but, it was 40 minutes of bliss!


...gotten her first skinned knees yesterday and didn't even cry.  They both bled.  I wanted to cry.
...really gotten into animals.  She calls every animal a "puppy."
...formed a friendship with Henry.  We must give Henry credit.  He lets her hug him, pat him (sometimes too hard,) lay her head on him, and take his toys away.  Normally, "puppy" is the very first thing she says in the mornings. Let's pretend it has nothing to do with my appearance at 8 am.
...loved being outside.
...started trying to repeat more of what we say.
...always answers yes or no by shaking her head appropriately.
...started transitioning to some 3T pajamas, and some 3T shirts, but still wears mostly 24 months or 2T clothes.
...brought us great joy and exhaustion!
Posted by Rachel at 3:18 PM No comments: