What Day is It?

I don't know if I'm just weird, but nothing sends me into a whirlwind of worry more than my kids not doing their basic things (eating, sleeping, peeing/pooping) normally.

Sometime last week Aubrey started pooping 7 or 8 times a day.  This is very unusual for her.  Of course she got horrendous diaper rash.  And, since she was pooping in the middle of the night, her sleep was off too.  It was all real lovely, but I totally assumed it was teething related since she's been fussy and drooling like crazy.

But then yesterday, I changed her formula (because 1 theory I have is that the nutramigen was making her poop like crazy -- apparently every other kid on it poops much more than once a day --and I had talk to the pediatrician about doing so after she had gone through all the first baby foods.)  Well, she pooped less, but then last night she pooped  what looked like rice.  RICE.  The child who had only eaten about 20 ounces of formula in 24 hours and had no solids in 48 hours pooped rice.  I called the after hours ped. number.  I wasn't freaking because she wasn't hurting, the diaper rash was better, and she was in the floor playing and smiling.  of course we had to keep the diaper and call the doctor this morning.

So, now we are skipping solids for a few days and giving her system time to adjust to the new formula.  Poor Aubrey, it looks like she will have ongoing digestive issues.  I promise not to discuss them on the internet when you are out of babyhood!! 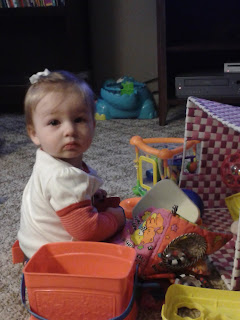 Langley went to school the past 3 days, and this morning woke up at 550.  She melted down at 7.  It wasn't a pretty sight.  She's been the healthiest one around here this week!  Random, but I noticed this week that she now says "Henry" correctly.  No more "he-he" or "enwy." 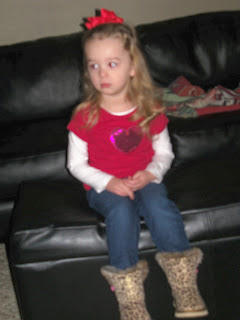 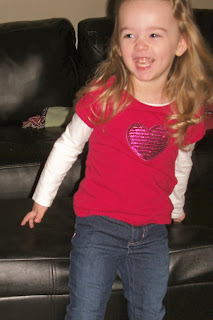 Josh has 5 games in the next 10 days.  We are 9-5 going into tonight's game, which is already better than our record last season!  Man, the first year with a new program is always the hardest -- remember that when you   want to say something crazy about new coaches (no matter what the level or sport.)

It's supposed to rain like crazy and drop 40 degrees in temperature by Sunday -- yikes!  I'm hoping Aubrey will be "normal" by then and I can teach Langley how to play one of her new games she  got for Christmas sometime in the next few days.  I may not have a clue what day it is, but we will (in the spirit of finding nemo) "just keep swimming, just keep swimming."
Posted by Rachel at 10:10 AM